Funny how a few inches of fresh snow can really make backyard bird feeders come alive.  That’s what happened across most of Iowa this week when a fast moving winter storm dropped anywhere from 4 to 15 inches of white stuff on the state last Sunday.

Although a wide variety of birds stopped by to raid my feeders, boisterous flocks of house finches seemed to steal the show.  House finches are relatively new visitors to my feeders and are, in fact, Iowa’s newest resident bird species.

Historically, the house finch was a desert inhabitant of Mexico and Baja California.  But the bird’s home range took a sudden and dramatic turn when, in the early 1940s, a number of cage birds were released near New York City.  The species exploded across the continent, arriving in southeastern Iowa in the early 1980s.  Today, the species is found in every Iowa county where it commonly nests in vines, on building ledges, or in hanging planters.  Meanwhile, native western populations have begun expanding to the north and east.  Scientists speculate that American house finch populations may already exceed one billion birds and that it won’t be long until the two [western & eastern] populations are joined. 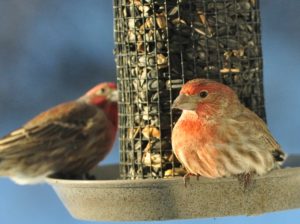 Unlike other exotic transplants — such as house sparrows or starlings — the colorful house finch does not compete with native bird species for nest sites and is a welcome visitor to backyard feeders.